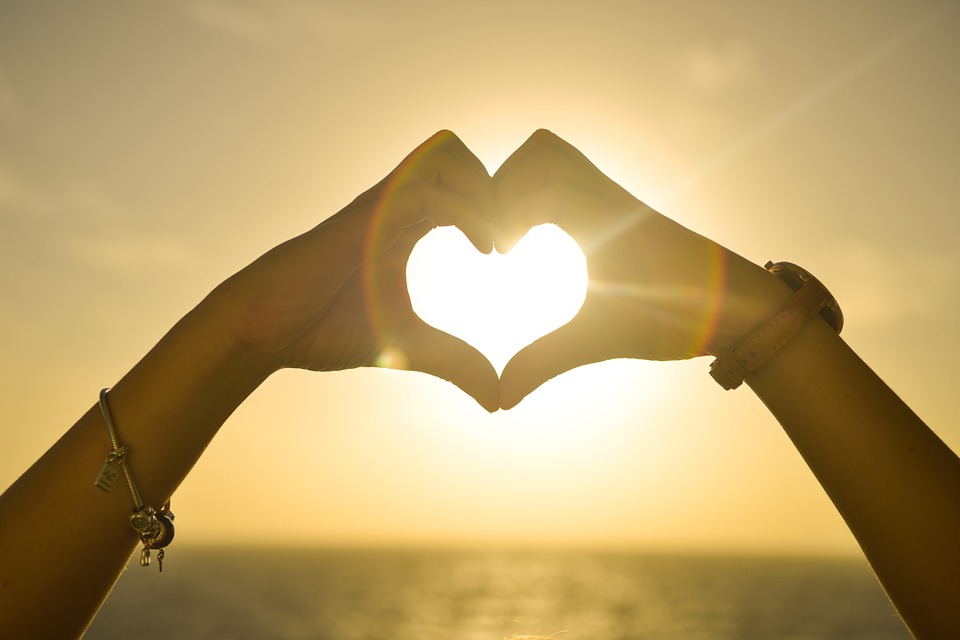 To Forgive or Not to Forgive…

Do you need to forgive to heal and move on?

Short answer. No. It also depends on your relationship with forgiveness. Some people have a great association with it. Others merely relate to forgiveness in terms of societal or religious programming. And then there’s another group of people that have experienced forgiveness as a manipulation or abuse tactic. The latter two groups typically struggle to forgive, but that’s ok.

You may struggle to forgive if you have a negative subconscious association to forgiveness.

We all have learned associations to various words and ideas. My definition of respect will differ from someone in the military trained to respect their commanding officer or someone in a certain rank and uniform.

What is your association to forgiveness?

How did you learn about forgiveness when you were a child? What were some examples of forgiveness in your family of origin? What are your associations to it now?

If forgiveness was learned through religious or societal context, then you might believe you must forgive in order to be a good and decent person.

Some people grew up reading the first self-help and new-age books that prescribed forgiveness for everything; it was the only way to move on. It was the answer to all your problems, except forgiveness can be a problem in itself.

If you tend to carry a lot of guilt around because you can’t seem to forgive, that’s not your fault, that’s faulty societal, religious, or abusive programming.

Many people have learned about forgiveness in its most toxic form. They were likely put in the position of repeatedly forgiving a parent, abuser and/or toxic adult in their childhood. Children always forgive- that’s the beauty and the burden of innocence. Abusive and toxic people use forgiveness as a way of weaseling back into your good graces. 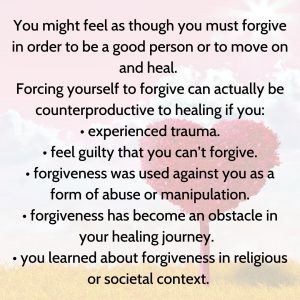 Forgiveness has been misused as a manipulation tactic in my personal life:

For instance, one person kept insisting on my forgiveness.

I finally asked WHY they wanted my forgiveness (this can be a revealing question).

The person answered, “So things can go back to normal between us.”

Yikes! No thanks! Nobody wants a toxic relationship to go back to normal.

Often an abuser or toxic person wants forgiveness, or to at least know they’ve been forgiven, so they can keep doing what they were doing before. This is not forgiveness. This is a pattern of avoidance and sweeping things under the rug to perpetuate the status quo in a dysfunctional family/relationship. 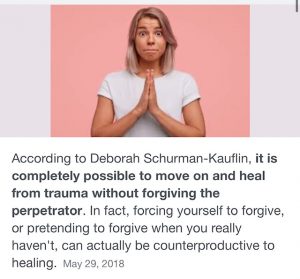 A friend of mine also shared her story of how forgiveness was used as abuse.

Forgiveness in her marriage (she’s now divorced), typically signaled that the usual manipulation and abuse would commence, in a very familiar cycle. As soon as he knew that she forgave him, the cycle would begin again, like clockwork. And speaking of work, she had to do some personal work around her association to forgiveness.

She described a time when she asked him why he wanted her forgiveness, and he said, ‘so that she wouldn’t keep bringing up things from their past’. He was uncomfortable with her bringing up what he had done to her in the past. Her forgiveness was for his benefit only.

Don’t make forgiveness part of your healing journey if it has been used against you; forgiveness is often the thing we need to heal from! Don’t take poison as an anecdote to poison.

If you had parent(s) that asked for your forgiveness but would continue to break your trust, then you might have an unhealthy association to forgiveness.

Healing your association with forgiveness can be a separate journey, if you choose, but it’s not necessary to move on. 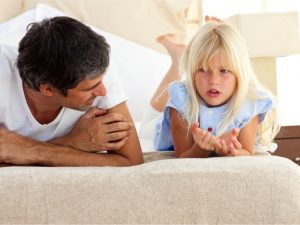 Another issue with forgiveness is the permanency we assign to it, like once you forgive, you’re good; it’s over and complete. It’s not supposed to bother us anymore, but that’s simply not the reality.

We are ever-flowing creatures of consciousness with the ability to live in the past, present, and future, all at once. It’s apparent even in the simplest task of grocery shopping- we buy foods based on known likes and dislikes from the past, while we are presently shopping for what we want in the future, or what foods will be best for our perceived future self.

Feelings from the past can spontaneously arise, and we’re instantly transported back to the moment the betrayal occurred. Pete Walker refers to this as emotional flashbacks in his book, “Complex PTSD“. So, forgiveness isn’t exactly the closure we’re hoping for.

If you have to suppress your anger or any other emotions, to forgive, it’s not mentally healthy.

Forgive, but never forget, as the saying goes. We don’t forget, and that can make it difficult to reach the fulfillment we desire out of forgiveness. 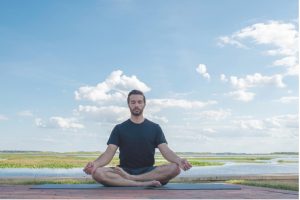 What about forgiving yourself or forgiveness for you?

Instead, “make peace with it”. Be guided by the sensations that arise within you rather than the term, forgiveness.

How do you know you’ve made peace with it, or with yourself?

Hurt and trauma heal through the body. Rather than making “forgiveness” your goal, focus on a sense of inner peace. Imagine peace as a sensation. When you’re feeling most at peace, what does that feel like in your body?

Can you titrate in and out of the betrayal or hurt, and explore the different feelings and sensations you have around it? Are there some aspects you can find peace with? This helps us face it rather than often suppress it or avoid it, which can be synonymous with forgiveness.

Peace can be experienced as a softening around the point of hurt/betrayal/trauma. The hurt won’t carry the weight or the charge when it does come up. If it begins to soften when the hurt arises in your mind, it’s likely that you’re nearing the other side of grief, which is peace.

Why approach it as a feeling or sensation? Because forgiveness can be a mental attitude, a logical decision, but the reality is, feelings, emotions, and sensations, are what we’re trying to heal. Logically, someone says they’ve forgiven, but when the betrayal comes up, they get uncomfortable- forgiveness hasn’t really healed anything.

The great thing about focusing on your inner peace, and growing that within you, is you begin to feel when someone or something disturbs your peace, and you’ll want nothing to do with it. You also don’t let in the same type of perpetrator, because you now know peace.

Set your intention on peace of mind and the sensations of inner peace, because that is the result of healing.

The stuck cycle of forgiveness:

People often believe the only thing standing in their way of personal freedom or happiness, is forgiving someone or something in particular.

People get stuck when they realize it still hurts or they’re still mad. Does that mean I haven’t forgiven?

What I’ve seen all too often is clients who think if only they could forgive then they’d stop thinking about all those bad things, or that person. They’d stop feeling guilty. They’d finally be happy or able to move on!

Don’t let forgiveness become an obstacle in your healing journey.

The added pressure to forgive can make things worse. It can cause a person to think about the pain or the past even more, obsessively hoping to find the secret or the loophole that will finally bring the sweet satisfaction of forgiveness, so they toss it around in their mind, overthink on it, until it becomes a stuck pattern.

This internal pressure one places on themselves to forgive, is often met with external pressure from others, like social media, books, religion, the perpetrator themselves, family, and psychotherapists- “you must forgive”.

Healing after something painful, requires a process. Face the pain and grieve it. 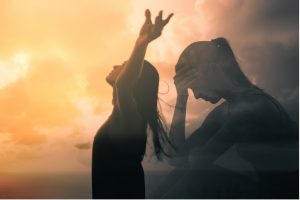 The 5 Stages of Grief: Denial, Anger, Bargaining, Depression, and Acceptance

The most natural process for healing pain and traumas is grief. You can apply the grieving process to whatever you’re trying to heal.

For instance, it’s natural and perfectly understandable to be angry after you’ve been hurt. Anger is part of the 5 Stages of Grief. There’s no shame. You can experience anger and still heal!

If you’re stuck on whether or not you can forgive, don’t be surprised if properly going through the grieving process can spontaneously produce forgiveness.

Grieve what was taken, what you never got, what was done, what happened, and sometimes that process leads to forgiveness (or peace).

What people have done to us, is about them. It’s a reflection of them, and there’s no need to forgive people for being themselves. Acceptance of who they are, is more appropriate. And acceptance is the last stage of grief.

Using what they’ve done as feedback about who they are? Sure. Letting it go, in a spiritual or energetic way that’s meaningful to you? Yes, I’m all for that! Practicing compassion without personal involvement? Great!

We are all human and everything we do is to get through this human experience. 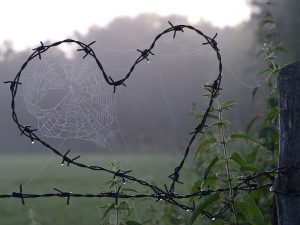 Loving-Kindness meditation is an effective practice (and alternative to forgiveness) to aid in your healing journey.

Loving-Kindness meditation, also referred to as Metta meditation, means cultivating a sense of connection. It doesn’t mean you like somebody or forgive someone, or even approve of them, it’s simply a deep knowing that everyone is interconnected.

Feelings of goodwill are unconditional. It’s not easy to think this way, and the mindset needs to be honed and strengthened through practice—that’s where loving-kindness meditation comes in.

Loving-kindness meditation often starts with sending goodwill toward yourself— when that becomes easier, then you can extend that sentiment to others- people you love, people you barely know, and the world at large.

[What is Loving-Kindness Meditation]

Listen to a modified version of Loving-Kindness (Metta) Meditation: You can make this an everyday practice. This Loving-kindness meditation begins with offering yourself love and well wishes, then your inner child, your loved ones, mother earth, and people across the globe. Multiple studies show the numerous benefits of practicing Loving-Kindness.

Healing is a process and a practice. You can apply the Loving-Kindness meditation or a cord-cutting meditation, practice what peace of mind feels like for you, and use the 5 Stages of Grief as a guideline for your journey, rather than wrestling with the idea of forgiveness.

PEACE AND BE WELL,

Living in The Past…

[NEW Guided Meditations for you! Look into your past and future!] Time is an illusion!...

Do you need to forgive to heal and move on? [Included: Free Loving-kindness Guided...

From the time we’re small, we’re asked, What do you want to be when you grow...